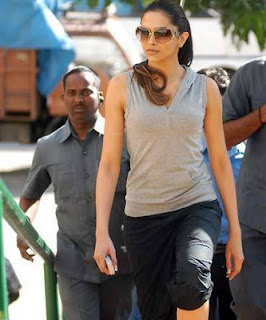 This is so exciting, because not only was Jab We Met one of the best movies ever, but this new one is with Deepika Padukone, our new favorite actress!!!! The film also stars Saif Ali Khan, and is being shot in Delhi at the moment. We are so excited for this one to come out, because its already know that its going to be absolutely fabulous!!!! Heres what Imtiaz had to say about the film “It's a simple love story which unfolds on the streets of London - a story about relationships. Deepika’s character is practical and it can be called the girl-next-door. Her character's called Meera Pandit and Meera is very confident, contemporary but with values. The name Meera is universal but at the same time it’s sensitive and has something mystic about it. The film's the love story of Meera ( Deepika ) and Jai (Saif). This film's emotions are those of love and sacrifice."
Posted by Bollybeat Crew at 12:05 PM No comments:

The new Shahrukh Khan and Priyadarshan's new film has been postponed till 2009 because it is going back to the editing room. So, we will have to wait to see SRK back with Rab Ne Bana Di Jodi on December 12th. Does it have to do with the ongoing feud with Salman, and possibly Salman's anger with Red Chillies doing the special effects for his new film Yuvvraaj?? Anyways we are SUPER sad about it being postponed, but Rab Ne Bana Di Jodi is going to be AMAZING! And its said to have a 12 minute item song with Rani, Priyanka, Kajol and Preity!!! It can't possibly get better then that!!!
Posted by Bollybeat Crew at 11:31 AM No comments:

There are a bunch of new films releasing in the next few months. In October, Kidnap and Drona are both releasing on the 2nd, Fashion on the 17th, Billo Barber and Roadside Romeo on the 24th. Dostana, Karan Johar's new film, is coming out November 14th, and Rab Ne Bana Di Jodi is coming out on the 12th of December. So there is a lot to look forward to this autumn!
Posted by Bollybeat Crew at 8:43 PM No comments:

Summary:
Raj is just out of school and on a tour of Europe with his 3 friends. They are sad because they haven't met any cute girls on the trip and its almost over. Then he meets a girl on the train who is obsessed with DDLJ and is dying to meet her Raj. So Raj pretends to miss the train and takes her to Zurich on a rental scooter. They fall in "love" and when they get to the Zurich airport Mahi's father tells Raj that he has to visit their home in Amritsar. Raj walks over to his friends and starts telling them about what a Killer he is because he totally just convinced a girl that he loved her, she's standing behind him when he is telling his friends and her heart is broken. The next affair he has is a couple of years later where he has a live in girlfriend, Radhika, who leaves at the wedding alter because he doesn't want to get married, and moves to Sydney. He meets a taxi driver in Sydney one night, Gayatri, and falls in love with her. They start to have a relationship and he asks her to marry him but she refuses. He realizes what he has done to the two other girls by breaking their hearts and goes to repair the wounds he left open. The first is Mahi who's heart has turned to stone and who does not even see that her husband loves her immensely. Raj convinces her that her husband is her Raj from DDLJ and that he never was that for her. Radhika becomes a big bitchy Bollywood star diva who is mean to everyone and so she makes Raj become her P.A. in order for her to forgive him. She softens and forgives. When he gets back to Sydney he see Gayatri has been writing him letters everyday and so he goes and finds her and she tells him that she loves him and she's sorry.

Review:
This film was SO GOOD! I loved loved loved Ranbir Kapoor in it! He was such a killer!! Minissha Lamba was really good too, it was the first film I have seen her in and I was impressed with her acting. Deepika was FABULOUS. Bipasha was very good and played her part very well. I did not think that she looked too old for Ranbir at all, and I thought they looked great together. Not only was the acting good, but the plot line was so emotional and fun and energetic! I thought this film really was a taste of new and young Bollywood. I simply cannot wait to see more films with the new wave of young and energetic actors and actresses! I didn't want the film to end because it was just so light hearted and lovey! I would definitely recommend going to see this film to any type of Bollywood fan. It is a quintessential Bollywood! All about LOVE LOVE LOVE! The wardrobe was really nice, I especially loved Raj's outfits, he was very well dressed, and I loved Mahi's pants in the Europe portion. I thought this film lived up to all it's hype and that it was definitely worth any filmi fans time!

Songs:
Where do I start with the music?!! I absolutely LOVE this soundtrack. Every single song is sooooooooo catchy and fun and just really good! I think the best two are Ahista Ahista and Khuda Jaane. Both of these music videos just are so haunting and just make you want to fall in love! Here is a clip from Ahista Ahista, and in previous posts there is a clip of Khuda Jaane.

Posted by Bollybeat Crew at 5:24 PM No comments:

So I just saw Tashan yesterday! I can't believe it took me SO long to actually see it. I was expecting much worse since it was such a big flop, but I always love Kareena Kapoor, so I thought it was a fun film, but don't go out of your way to see it. I am not writing a formal review on this film yet because I just haven't had the time! But the review for Bachna Ae Haseeno should be up tomorrow! I really loved the music from Tashan and I can't decide if I like Falak Tak or Chhaliya better, but heres a taste of Falak!
Posted by Bollybeat Crew at 3:35 PM No comments: