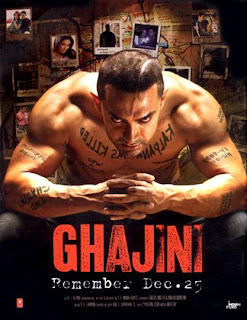 This promo has Aamir Khan sporting 6 new avatars!!! Ghajini releases on the 25th of December and is supposed to be an action/romance story, so we are very curious to see how it turns out! This is the film that Aamir went bald-with-the-curving-line-on-his-head film, but it seems like he has had that hairstyle FOREVER!
Posted by Bollybeat Crew at 4:37 PM 1 comment:

Summary:
Two guys, Sam and Kunal, are living in Miami and looking for an apartment, and they both show up at the same house trying to get the room. The landlady won't let them move in because they are men, and so they decide to pretend to be a gay couple to get the apartment. The apartment really is the landlady's niece's, Neha, and she is going to share with the renters. Both Sam and Kunal immediately fall in love with her, but they keep up their gay act because they love the apartment. Quickly all three of them become best friends, they do everything with each other and its all really fun! Then Neha starts to fall in love with her new boss, Abhi, and both Sam and Kunal become really jealous and try to end Abhi and Neha's relationship. They end up breaking them up, and reveal to Neha that they both really love her and that they are not gay. She gets really pissed and is like you guys are not my friends anymore. So everyone is sad, and then they finally get Abhi and Neha back togeather and everyone is friends again.

Review:
This was such a silly, yet entertaining film. I felt it really was using all the stereotypes of gays in the book, but they did it in a non offensive way. The whole film was really just about Sam and Kunal's relationship as a fake gay couple, and Priyanka Chopra always seemed like the third wheel. Abhishek is HILARIOUS in the film and John is BEAUTIFUL. I think my favorite thing about the film was their clothing. Everyone was so stylish and colorful, especially Abhishek, when he first got out of his pink convertible in the beginning during 'Shut up and bounce' his Christian Audigier shoes almost killed me! Bobby Deol was really an dull character, and he looked really beat in comparison to John and Abhishek, who sparkled. I thought the John and Abhishek pairing was great and they were really fun and got into their characters. I think you should defiantly watch this film if you are in need of a good, silly laugh and really don't take the film seriously. I was impressed with debut director Tarun Mansukhani, and I am curious as to what kind of film he will come out with next! So overall I enjoyed this film despite its stupid humor and light plot.

Music:
I liked about half of the songs from the movie, but I really wished there were more! I think there was defiantly more opportunities in the film for more music videos, but there wasn't! I really liked 'Shut up and bounce' Shilpa Shetty's item number, but I was shocked when I saw her because she really looked old. I also really liked the 'Maa da laadla' remix at the credits, its really dancey and good. 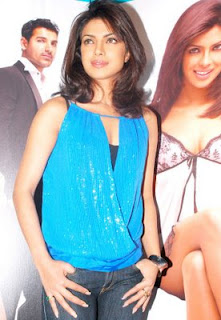 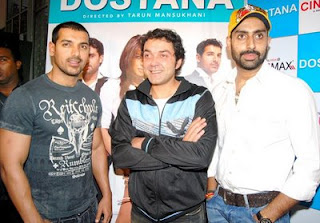 As we all know, Dostana opened on friday, and here are some pics and interviews of the superstar cast at the film's press conference!

The review for Dostana will be in on Monday!
Posted by Bollybeat Crew at 2:12 PM 2 comments: 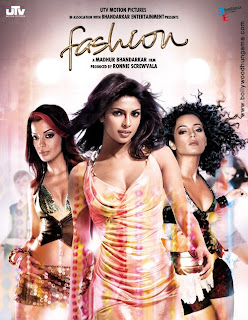 Cast:
Priyanka Chopra...Meghna Mathur
Arjan Bajwa...Manaav
Arbaaz Khan...Abhijit Sarin
Summary:
A girl strives to be a supermodel so she moves to Mumbai and starts working her way up the ladder. She finally becomes a supermodel, but at the cost of losing all of her loved ones and kicking another model out of the business. She becomes overconfident and has an affair with her boss. From there everything goes down hill and she has to regain control of her life in order to survive. She realizes that her life isn't as glamorous as she had always dreamed of it.
Review:
I was really surprised by this film. I was expecting something overacted and not very interesting, and I was kind of sad that it was not going to be good. But then I watched it and was pleasantly surprised. Priyanka Chopra was really good in it and I am really happy for her because things have not been going good with any of her films this year. Love Story 2050 was a flop, Drona was a flop, but I think Fashion is a sucess. It was really interesting seeing the inside of the fashion world according to bollywood and I really liked the characters. The problems were real, but of course exaggerated wonderfully, and it was fun to watch. The subject was kind of sad but I really liked watching it. I think the main problem was there there wasn't any music videos. There is like a montage with Meghna and her first love interest Maanav, but that is it. So I wish there was more music, but it wasn't painful not having it there. I would recommend this film to any one really, its not too bollywood but it still  was good.
Music:
Like I said before, there isn't much music in it, but there was a theme song that they played in all of the fashion shows and as background music. The best song was the montage one, Mar Jawaan.
Posted by Bollybeat Crew at 2:47 PM No comments:

Summary:
Gopal is married to a very suspious wife, Ekta, who watches too many tv serials and is constantly think Gopal is having an affair.One night Gopal rescues a woman from getting gang raped and then both of their cars break down and so they end up spending the night together on his friends yacht, Ekta almost dies of worry and is very suspicious of him when he comes home the next morning. Then his coworker is murdered and Gopal becomes the primes suspect and it becomes a chase for the girl he spent the night with so she can give him an alibi.

Review:
I was SO disappointed with this movie. I thought it was so stupid and I felt my brain cells slowly dying while I was watching this in the theater. The summary is so short because that really is all that happened. NOTHING! I wanted to die every time Ekta's brother Lucky came on screen because he was supposed to be dumb, but he just sounded like a high pitched animal the whole film. My ears were cringing by the end. The sad thing was that there were only 3 MUSIC VIDEOS IN IT!! What is that about???!?!?! Okay so the opening song, Vacancy, then thrown into the middle was Tha Kar Ke, it didn't fit into the story at all and it was just really random but it was the only thing that saved the movie. Then there was Meow at the credits and it went into a little box so you couldn't even see it. What I am curious about is what happened to Tu Saala????? The music video wasn't included. I was so sad because that was one of the things pulling me to see this film and then it wasn't there!! So don't waste your time seeing this movie at all. It was boring, the acting was ehhhhh and it was ANNOYING!!

Music:
Wellllll my favorite song from the soundtrack is Tu Saala but I really like Meow and I thought the music video was really good. Its reported that Tha Kar Ke is the most expensive music video to be made in Bollywood so far, so that is quite impressive. It was full of shoot outs and flipping cars, and it was the most enjoyable thing in the film.
Posted by Bollybeat Crew at 5:44 PM No comments:

It looks good!! I am very curious to see Shah Rukh in his new avatar. Yash Raj released this promo before the music launch because Shah Rukh wanted to have this song promo come out on his birthday, which is today, November 2nd. HAPPY BIRTHDAY KING KHAN!!!!

Posted by Bollybeat Crew at 11:09 AM No comments: