I hope everyone has a wonderful diwali!!!! 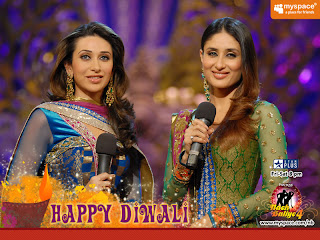 Posted by Bollybeat Crew at 7:13 PM No comments:

I was at target looking in the makeup section and I found this: Aishwarya Rai Lipstick! I almost died. It's a beautiful shade of beige, and really makes you look bollywood. 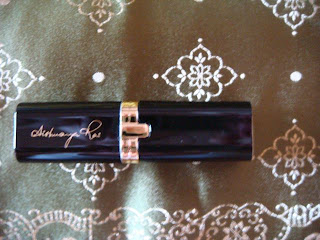 Posted by Bollybeat Crew at 7:05 PM No comments:

Cast:
Imran Khan...Kabir
Minissha Lamba...Sonia Raina
Sanjaay Dutt...Vikrant Raina
Summary:
Kabir is a young boy who grew up in jail for a deed he did not mean to do. Sonia is the daughter of India's richest man, Vikrant Raina. She wants to see her father because her parents divorced a long time ago and the mother is not letting her go see him, so she leaves her house in a fit of anger and goes for a swim during which she gets kidnapped and wakes up in a locked house with Kabir. He kidnaped her and we do not know why he did it, he doesn't want any ransom, but starts playing mind games with Vikrant. We find out that Vikrant sent a young Kabir to prison accusing him of kidnaping Sonia, when he really was just taking his car to get his friend to the hospital. Finally everything is well again and Kabir makes Vikrant see his mistake in doing so and Sonia goes back to her parents.
Review:
I was really excited about this film because it is Imran Khan's second film and I absolutely loved him in Jaane Tu, and so I had a feeling it was going to be good. Also this is Minissha's second hit and I was curious to see how she performed with this new avatar. I thought they both did well in proving their versatility, but I felt the plot was a little weak. It was fine in the beginning, but towards the end it sort of died because they couldn't really maintain three hours of like 1 room. BUT, I did like the movie a lot even if it was a little dead because they filled the deadness with a lot of good action and little spasms of interest. BUT I WISH THEY FELL IN LOVE! Meaning Kabir and Sonia, like they almost did during the song Mausam, but it turns out it wasn't real and I was so disappointed because Imran was soooo beautiful and he really needed a heroine to love. So that was the biggest disappointment,  NO LOVE! But I enjoyed the film because it kept you entertained and you left with a good feeling. I would recommend watching this film because it was fun, even with the lacking plot. It will keep you entertained and you will love gazing at Imran for 3 hours :)
Songs:
I really liked Mit Jaaye and Hey Ya because they are very dancey and have good beats. Mit Jaaye is Kabir's theme song, they showed it at the credits, but I wish they incorporated it into the film like they did with Hey Ya, Sonia's theme song.
Posted by Bollybeat Crew at 8:48 PM No comments:

Summary:
Aditya grows up like a Cinderella, abused and lonely. One day Riz Raizada sees Aditya and immediately tries to have him killed because he knows its Drona. The legend of Drona is that he is to protect the elixir of life from the evil demons that are always trying to take it. So Aditya is clueless of this and when Riz tries to have him killed all of the people in Adi's life save him. He has an assistant, Sonia, who has been trained her whole life to help Drona and when she breaks this news to Adi he doesn't believe it. So when he comes to terms with this finally, he is whisked into the kingdom that his mother lives in, and then he goes on a quest to stop Riz from taking the elixir of life.

Review:
I was sooooo disappointed in this film. It was had no real plot at all, the acting was whatever, the special effects were lame, nothing had any depth in the film, not even the love story between Sonia and Drona. It was all so stupid. It was like a really bad remake of the Lord of the Rings or something, trying to do these stupid destiny fantasy things. I am glad that it was a flop because it wasn't deserving of being a hit. As much as I love Abhishek, I really didn't like the film. I know that he said it was going to be his best movie yet, and that is why I went saw it, but I was sorely disappointed. I mean it wasn't painful to sit through, and it kept you engaged for the length of the film, but on reflection and even when I was watching it I really didn't like it. They couldn't even provide us with some good item songs to keep us content. The music was really not good and not original. The villain, Riz, was a really bad character who was trying to provide comic relief from the ever serious and angry Drona, but the comedy was really lame and had no substance. So, I would not waste my 10 dollars watching this movie this movie again, and I would not recommend anyone else do the same.

Music:
I guess the best song in the movie was Oop Oop Cha, Priyanka's song. But I have to say that even this song is not that good.
Posted by Bollybeat Crew at 4:03 PM No comments:

Here is a deleted scene from our new favorite movie, BACHNA AE HASEENO!!! It's sooo cute, and sooo bachna!

Posted by Bollybeat Crew at 6:56 PM No comments:

So here are some added films that are coming out this fall and beginning of next year. Karzzzz is out on the 17th of October, EMI and Golmaal Returns are coming out the same day as Fashion, the 29th of October. In November, Dostana is still coming out on the 14th and Yuvvraaj is out on the 21st. Rab Ne Bana Di Jodi is out December 12th. Chandni Chowk To China is set for January 16th and Billo Barber is set for sometime January. Main Aur Mrs Khanna is scheduled for the 13th of February and Dilli 6 is scheduled for sometime in March.

Our review for Drona will be coming out tomorrow.
Here is a new song from Golmaal Returns
Posted by Bollybeat Crew at 11:35 PM No comments: