This looks too good! Luck By Chance has a bunch of star appearances in it! At first I thought it was only going to be Hrithik Roshan, but after this promo, you can see everyone that is going to be in it like Kareena Kapoor, SRK, Abhishek Bachchan, Aamir Khan, Karan Johar, Ranbir Kapoor Akshaye Khanna, Vivek Oberoi, John Abraham and the list goes on!! Watch out for them in this promo! Luck By Chance comes out on January 30th, and is Farhan Akhtar's 2nd film.

My Name Is Khan Exclusive Photos! 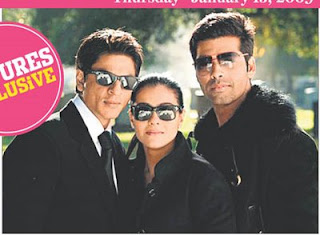 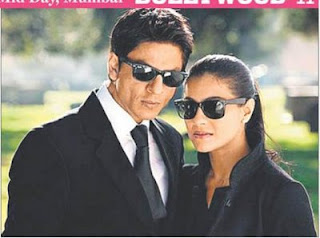 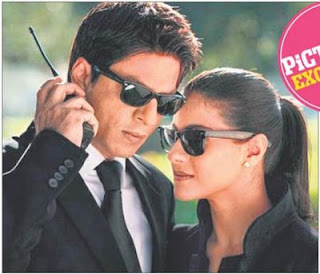 This is while everyone is in Los Angeles I am assuming. It looks like its going very well!! 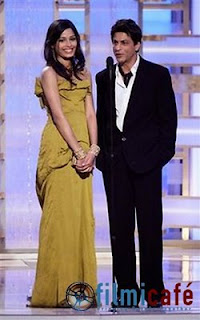 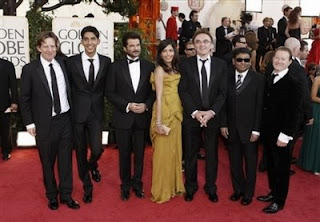 The recent Danny Boyle film Slumdog Millionaire swept the night away last night at the Golden Globes! Slumdog totally deserves it because it was so good!!!!!! Freida Pinto and Dev Patel are amazing actors and we can't wait to see them in more! But we have to say that the greatest moment of the night was Shah Rukh Khan's special appearance to introduce a clip of Slumdog Millionaire. Here was the biggest actor in Indian cinema and I don't think anyone even knew who he was!! Crazy!!
Posted by Bollybeat Crew at 6:20 PM 1 comment: 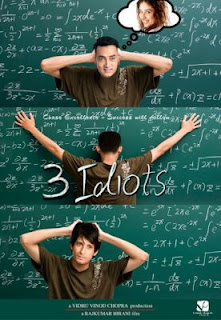 It has been rumored that the lovely Kajol will be making a special appearance in Aamir Khan's 3 Idiots! This is Kareena Kapoor and Aamir's first venture together and so we will be quite excited to see how it works, and now even more excited about the Kajol item song? We will be curious to see if the Aamir Kajol chemistry in Fanaa will be able to happen again!!
Posted by Bollybeat Crew at 5:39 PM 2 comments:

STOP IT!!! Here are the latest two song promos from Billu Barber, and they are so good!!!! I can't wait for the music release because these are some of the best songs I have heard since Bachna Ae Haseeno!! The first song is You Get Met Rocking and Reeling with Priyanka Chopra and SRK, the second song is Mar Jaani starring SRK and Kareena Kapoor and the third one is Love Mera Hit Hit with SRK and Deepika Padukone!! I think they are both item songs by the two starlets for Billu Barber. It comes out February 13th and I can't wait!!!!

Summary:
Surinder Sahni is typical middle class man who works at Punjab Power ("Lighting up your life") happens to get married to his old teacher's daughter due to crazy cirucmstances and he immediatly falls in love with Taani. The problem is that she is disguseted with him and won't give him the time of day. She is just there to serve him breakfast lunch and dinner and nothing else. Taani is a young girl who was very energetic and spunky but when she got married to Suri she lost that. Then she saw an ad for a dance compitition in Amristar and she immediatly wanted to do it. So Suri allowed her to go and do it but then planed to disgusie himself as a "hero" type guy from films and be her dance partner and see if she fell in love with him. Taani ends up falling in love with Raj (Suri's disguise) rather then ever loving Suri, and in the end she has to decide who she loves more while Suri's disguse is unnoticed by Taani. And in the end she finds out that Suri was really playing both people and they live happily ever after.

Review:
Hmmm I felt this movie was really good but the morals they were teaching you were completely wrong. Basically they were saying that a woman must always stay with her husband no matter how horrible he was and how much he was ruining your life, and that a wife must always see God in her husband. Even though I was not a fan of that, the movie was really fun! The character Raj Kapoor was SO UNBELIEVABLY GOOD! Okay his style was fantastic, his personality was hilarious, and I think it was bad that Suri was totally leading Taani on. When he was Raj, he kept telling her that he loved her and he was fun and spontaneous and exciting so of course Taani would fall in love with Raj rather then super boring Suri who did nothing and was really awkward with himself and could hardly talk. So I think Taani really should have ended up with Raj and run away with him, not see God in Suri and stayed with him (Even though it really was the same person). The one thing I thought was inconsistent was the way Suri acted after Taani found out that he was really Raj. He still acted like the same boring, awkward guy even though he was the total opposite when playing Raj. It seems like he would be able to be more like Raj since he was Raj and not just be not able to handle life and people... But oh well. I enjoyed this film and was really happy that our favorite studio Yash Raj had a hit after this long drought. I would recommend this film to anyone who wants a kind of silly film that is fun to watch and not take too seriously.

Music:
The music is of course good! Its what made the film that much better! I think I love all of the songs but most of all Haule Haule and the item number (Phir Milenge Chalte Chalte) with Kajol, Bipasha Basu, Preity Zinta and Rani Mukherjee was such a pleasant suprise!! You can watch previous videos on the blog of Dance Pe Chance and Haule Haule.