especially with those white horses.
Posted by Bollybeat Crew at 5:23 PM 3 comments:

Summary:
Roshan is a young NRI who has never been to India, but his grandmother's soul is still in Chandni Chowk. She gets cancer and has little time to live and insists on going back to her heart, Delhi. Roshan agrees to go with her, and he is immediately taken with the energy and care that everyone has. He spends time getting to know all of his grandmother's friends and neighbors and falls in love with the young Bittu, a girl aspiring to be on Indian Idol. There had been attacks from an unknown person disguised as a kalaa bandar (black monkey) and soon the paranoia goes to new heights. Everything becomes about religion and how Hindus are against Muslims and Muslims are against Hindus. Neighbors and friends start turing against each other and eventually everyone's pent up anger is expressed on the mixed "foreigner" Roshan because he is both Hindi and Muslim.

Review:
This film was basically about the inside of Delhi, and was more a study of it's culture rather than of specific characters and their problems. But rather it was about the culture's problems and the way they have to fix those problems as a society together. Now, I walked into the theater expecting a very good masala film all about Roshan and Bittu's love, but instead I was surprised by this cultural study that I found rather depressing. I think it did a really good job expressing how irrational people become when they are scared. It really showed the deep insecurities in India and how even though people know what they are doing is wrong, they still do it because society has said to do so and done so for so long. I enjoyed this film a lot, but honestly I wish there was more Sonam and Abhishek in it! I think Sonam was really at her best! Bittu was definatly the best character in the film because she seemed so really and I have to say I think she has improved since Saawariya. I would recommend this film if you are not expecting to come away with a good feeling. I came away with a kind of disgusted feeling about how strange society has become and is, and how juvenile and stupid people are. But I still liked it and I think anyone would.

Cast:
Irrfan Khan...Billu
Shah Rukh Khan...Sahir Khan
Lara Dutta...Billu's Wife
Summary:
A small town barber, Billu, is in the dumps because of a new barbershop down the avenue that is much fancier than his. He has lost all of his customers, and all he has left is his wife(Dutta) and his two children. Billu is trying all the things in the world to make some money to support his family. Suddenly the biggest superstar in India needs to make a film in a small ruel town, and he chooses Billu's town to film in. The town goes crazy! Everyone wants a piece of Sahir Khan while he is in town, and a rumor has been spread that Billu knows Sahir very well, and he's like a brother to Sahir. Billu becomes a local celebrity, and everyone wants the connection to their hero. Billu is a very humble person and gets very bothered when he is pushed around by the townspeople. And he is forced to make promises to get Sahir to see people, and we don't even know if he really does know Sahir at all. If Billu really does know Sahir then all of his problems will be solved, but if he doesn't know Sahir he will become the laughing stock of the town. Its up to kismet to see if they really do know eachother...
Review:
I really enjoyed this film! I thought each character was so nice and they all really seemed like genuine people. You connected with Billu because of his humbleness and you really felt what he was going though, and Sahir seemed like such a real celebrity. He wasn't a hero on and off the sets, he was a normal person who really thought it was strange having so many people literally die to meet him. Even though it was a very simple story, I thought Priyadarshan really turned it into a sweet and touching film. When I walked into the film, I was expecting the worst.As a director, Priyadarshan seems to make more silly films and honestly I don't really enjoy them. I was expecting the whole film to be about Rajpal Yadav and his slapstick acting, but it wasn't! I have to say that the COMPLETE highlight of this film were the item numbers!!!!!!! Deepika, Priyanka and Kareena were so amazing and the sets and clothes for the songs were mindblowing. I would definently recomend seeing this film in theaters because its a really fun film, and very sweet.
Music:
HOW COULD YOU NOT LIKE THIS MUSIC! Most of the songs were absolutely amazing! The best being Marjaani, Love Mera Hit Hit, and You Get Me Rockin and Reelin. Marjaani was a Moraccan themed set with Kareena Kapoor and SRK, Love Mera Hit Hit was a futuristic set with Deepika Padukone and SRK, and You Get Me Rockin and Reeling was with Priyanka Chopra and SRK on a stylish house(?) set. I don't really know how to describe that one. You can see all of these music videos on a previous post 'Billu Barber Song Promos'.
Posted by Bollybeat Crew at 5:22 PM 1 comment:

I have been listening to this song and its just so good! Latoo from Ghajini. 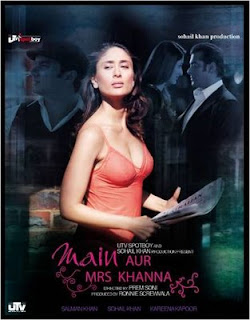 Finally some news on this!!! Main aur Mrs. Khanna is set to come out on June 12th, 2009. It stars Kareena Kapoor as a restless housewife in Sydney married to Salman Khan. She starts to have an affair with Sohail Khan. This looks sooooo good! We hope it will be good, because there has not been a very good Kareena film since Jab We Met! Its said that she is supposed to have gained some weight for the role, to look like a wealthy housewife. On another Kareena Kapoor note, it seems that she has bagged a lead in Race 2, the sequel to the 2008 film, Race. She will be opposite Saif Ali Khan, and Bipasha Basu will probs not be in the project.

Billu Barber review will be out by the end of this week.
Posted by Bollybeat Crew at 1:21 PM 1 comment:

Another Name Change for Billu Barber! 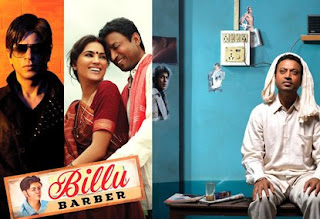 Goodness! This film has had so many name changes. The latest is that it is not longer 'Billu Barber' but now just 'Billu'. I guess the haircutters of India didn't appreciate being called barbers and they complained to Red Chillies. Shah Rukh stated that he was in no mood to fight with people, and so he let them have their way. “I had a discussion with the association of hair dressers and salons in Maharashtra. And I’ve pokes to the associations in other cities on the phone. I don’t think we were wrong in ever using the word ‘barber’ and that is what be stand by. But they have their own take on that. The film has been made with a good feeling. So, I’d rather not hurt anyone, because it’s not going to affect my film...I think I’m also a little mellow since I’m going for my surgery, so I don’t want to hurt anyone." So all the new adds and posters you see will have just 'Billu' on it. It comes out this friday, the 13th. 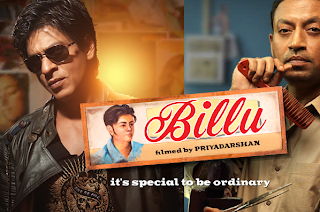 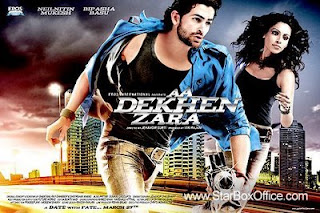 This is the newest film with Bipasha Basu and Neil Nitin Mukesh 'Aa Dekhen Zara'. This is the promo for the title song. Honestly I think Bipasha Basu's voice really does not work with the song, but other than that its good! It sounds very Daft Punk like. Have a listen :)

Summary:
Farhan Akhtar plays the typical struggling young actor, Vikram Jaisingh, who has moved to Mumbai from Delhi with high dreams of becoming a megastar. He meets another struggling heroine, Sona, and they fall in love and have a relationship. Suddenly their world is flipped upside down when Vikram gets the role of a hero in a major production with a famous debutant actress. He replaced Zaffar Khan in the role. Next thing you know, Vikram and the young actress are having an affair on the sets of their film, and word gets around. Sona comes to visit their filming location, and realizes that the rumors are very true of the affair. She is devastated, be determined not to go back to Vikram. The film becomes an instant success and Vikram rises to stardom and soon forgets the young actress and everyone who has helped him, getting carried away with his stardom.

Review:
I was really hoping for more from this film because I think it had a lot of potential to be a great film. I really wish it had some more bollywood masala in it, there were hardly any songs and I feel that the drama level could have gone way up. I think this movie could have been way longer and been really much better if they expanded on the story. I felt that everything was kind of rushed and not really delved into. Sure we got the idea of everything, but we should have seen Vikrams life slowly destroy itself while he sold it for the price of fame, not just that he was on a billboard and that Sona was pleased with being a B-grade actress. NOBODY WANTS THAT, don't say they are content when they are not. Anyways that kind of bothered me, but over all it was a really fun film to watch because of ALL THE STAR CAMEOS :) With the heart-throbbing Hrithik being a superstar to Shah rukh giving Vikram deep advice on becoming a star all the way to Kareena's house party, it was full of stars being themselves in the slightly shady world of Hindi cinema. I would definitely recommend going to watch this in the theaters, just don't go in there looking for a masala film, go in expecting the watch the behind the scenes of a masala film.

Songs:
Well, there was only about two songs I think in the film, and the more dancey one, Baawre, was the better one. Performed by Hrithik, it looks great with his amazing dance skills and the fun backdrop of a circus.