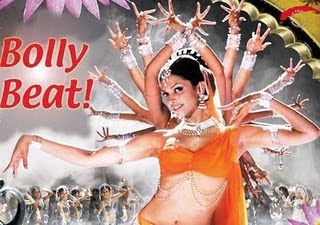 So we just set up a new Twitter account for Bolly Beat, so you can keep updated at all times! Click the icon on the right of this page to see the Twitter and please follow us @BollyBeatcrew
We are so happy to be back again, and there are going to be many more reviews to come!!
XOXO Bolly Beat Crew
Posted by Bollybeat Crew at 3:42 AM 3 comments:

Cast:
Kareena Kapoor...Priya Malhotra
Shahid Kapoor...Immy Kappor
Plot Summary:
The film starts out with a idealist Priya(Kareena) who believes that she really does have a soulmate out somewhere, and refuses to give in. One day Priya and her friends go to see a tarot card reader, and the woman tells Priya that she will meet her soulmate, in just a few days on a beach in a foreign country. Priya immediately ignores the psychic because she has no way to get to a foreign country, let alone meet her soulmate on a beach, but little does she know, she was selected to attend a conference with her college in Bangkok. While in Bangkok she meets Immy(Shahid) who is also a student at the conference. He is a crazy party guy, complete opposite of Priya, but they meet on the beach and she becomes convinced that he is the one. Immy learns of Priya's high standards and is determined to woo her so he steals her diary and starts becoming her perfect man. They are completely in love until Priya finds out what he did, and she decides to test destiny and put Immy up to 3 tasks to see if they were really meant to be. The first is to go to the same floor in the hotel randomly, the second is to find a book with Priya's number on it which Immy is supposed to find, and the third is his number on a rupee note, which Priya is to find. If they happen to find these things it means they are meant to be together and if they don't they they must say goodbye forever. They both move on and three years later, they each find their allotted items and fall in love again.
Review:
I had been looking forward to this film for many years before it came out, and I must say I was disappointed when I finally saw it. The film is probably the last to costar Kareena and Shahid after their big breakup, despite their magnetic on screen chemistry. The film had originally been made a couple years ago, right after Jab We Met, but due to many set backs the film just came out in 2010. I was praying that this movie would be another Jab We Met, amazing and full of life but that was not the case. The plot was boring, and it made Kareena look like such a cold hearted person, who just leaves the love of her life indefinitely because she wanted to test him. Shahid was a jerk, who was really trying to be like Raj from DDLJ or something, but it didn't work. To bland storyline was not only forced but almost annoying to watch with all the 'almost finding that rupee/book, but the person didn't notice' situation. I think if this film had not received so much hype over the years and just came out randomly it would have been a fine movie to just go and see, but to wait a couple years to see such a cookie cutter movie was disappointing. I wouldn't recommend going out of your way to watch the movie, but if its on t.v. or something go ahead and watch it because after all it still is Kareena and Shahid together again. Overall this film was boring and predictable and not what it should have been.
Songs:
All of the songs sound very similar, but I did like them. There was no techno-remix songs which was rather refreshing and it was just good old Bollywood music. The theme song 'Milenge Milenge' is very haunting and melodic and the others are all kind of take offs of it. The music videos are what you would expect, all very Bollywoody, but not in an exciting way. I think my favorite song from this film was 'Ishq Ki Gali' it really good vocals and is super romantic! So I would definitely say the one good thing about this film was the music, its some nice Bollywood music that you can always listen to.
Posted by Bollybeat Crew at 1:56 AM 1 comment:

BOLLY BEAT IS BACK!

It has been a long year since I've updated Bolly Beat, but life has transitioned and now I feel like its time to start updating on Bollywood again! I read all of your posts over the past year and really appreciate the love from my readers!!! There is no theater that plays Bollywoods near where I live anymore, so it will be much harder to get reviews in the day the films come out, but it will happen. I am so excited to bring readership back and rekindle our love for BOLLYWOOD!!
xoxo Bolly Beat Team
Posted by Bollybeat Crew at 1:36 AM No comments:

My Name is Khan is out this week!

My Name is Khan is out this week, starring SRK and Kajol and directed by Karan Johar. I believe Karthik Calling Karthik will be out in mid to late February. That is starring Deepika Padukone and Farhan Akhtar. Make sure to see them! Reviews of the films will be up soon, after I have seen both of them, and hopefully I can get up some other delayed reviews!
XOXO BollyBeat
Posted by Bollybeat Crew at 9:54 PM 7 comments:

My Name is Khan Promo

Finally we have a date for MKK, February. The first Karan Johar film in a while, that he actually directed, and honestly its style looks very similar to Kabhi Alvida Naa Kehna, but obviously not quite similar in the story. I am quite surprised that Karan Johar did a 9/11 film because it has really become the trend in Bollywood this past year, and I didn't think of him being into that. I think it will be amazing because of our favorite pairing, SRK and Kajol! What more could one ask for!
Posted by Bollybeat Crew at 9:32 AM 5 comments:

Summary:
Simrita is a "man hating" doctor and part time supermodel, while Viraj is a famous stuntman in Hollywood. Both of their best friends fall in love and get married, leaving their friends behind to grumble about how completely ridiculous love is. When Simrita and Viraj meet, it becomes an immediate battle of the sexes and they vow to mess up each other's love lives. Simrita schemes to woo Viraj, and then drop him flat to make him see how men are horrible and so is love, while Viraj is simultaneously planning the same demise for Simrita. So they each go about their wooing and eventually fall in love with each other, of course, after a serious of mishaps and typical bollywood "comedy".

Review:
Basically I found this film rather offensive and completely unoriginal. The plot was bland and random, and I felt slightly embarrassed for the actors because they were apart of this film. I think the reason I disliked this film so much was because I came into with high hopes of a good Kareena-Akshay romantic, yet silly film, but those hopes were squashed when I saw the first scene. Basically it stereotyped every single kind of person and did it very untactful manner at that. I hated the horrible Hollywood guest appearances like Denise Richards and Sylvester Stallone whose acting skills had been reduced to those of a five year olds. The one thing I liked about this movie was the style of it. The clothes were great, both Kareena and Akshay were dressed impeccably, and all of the sets were very nice and very Los Angeles. I would not recommend this film, because at the end of it, you will deeply regret the loss those 3 hours, and be disgusted to a point that you will be sorely sickened with your choice of film, just as I had been.
Music:
What gave this film it's much needed hype was the soundtrack, its amazing! This is the only redeeming quality of this film. I absolutely love most of the music and would definitely recommend getting the soundtrack, even if you don't watch the film. My favorite song from the film was by far Bebo! It has such a good beat and its just a really fun song. Here is the music video from Kambakkht Ishq.
Posted by Bollybeat Crew at 9:31 AM No comments:

Wow, here I am. Back from the mayhem of school and onto more BOLLYWOOD! Happy 2010 to all of my beloved readers, and I hope this year holds many bollywood surprises. Here is a promo for Rajneeti, a film with many stars starring in it, but I think Katrina Kaif will have the biggest role in the film considering all we have heard about it is her playing Soniya Gandhi. But anyways, Ajay Devgan, Arjun Rampal, Ranbir Kapoor and Vivek Oberoi. It looks a lot like the Sarkar Raj films, but obviously not about a corrupt family.

I am going to start posting reviews from the summer that I have missed, and catch up to films out right now!
Posted by Bollybeat Crew at 9:16 AM No comments: